The Appalachian State University was formally dedicated in memory of its founder, Dr. I.W. "Bill" Carpenter, Jr. on May 3, 2008 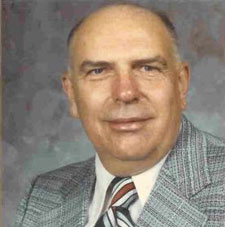 Irvin Watson "Bill" Carpenter, Jr. ( b. November 29, 1923 -- d. December 11, 2007) son of Ruth McCord and Irvin Watson Carpenter, Sr., was born in Washington, District of Columbia. After graduation from Western High School in 1941, Carpenter entered Purdue University in Lafayette, Indiana. In July of 1942, he left Purdue to serve in the United States Navy. He served four years on the U.S.S. Wisconsin and during that time received six battle stars. He was discharged from active duty in 1946 and joined the Naval Reserves to serve as a lieutenant.

In 1953, Appalachian President, B.B Dougherty appointed Dr. Carpenter to the faculty at Appalachian as a biology professor. Dr. Dougherty would surely be proud today if he could know of the tremendous dedication and service Bill Carpenter provided to Appalachian during his thirty-three-year tenure. Bill voluntarily served as "cameraman" to take films of athletics events for the Mountaineers for fifteen years! During most of that time, he donated his services without charge. After he was required to accept payment, he donated his pay, along with enough other funds, to the Yosef Club to make him a member of Appalachian's most prestigious level of giving, the Chancellor's Committee. Dr. Carpenter has the distinction of having made a gift to the Appalachian Foundation every year since the foundation was formed.

Carpenter was co-chair of the Ida Belle Ledbetter Scholarship and a sponsor of the Chan Gordon Scholarship. For a number of years, Dr. and Mrs. Carpenter served as sponsors of the Appalachian cheerleaders. The list of accomplishments to Carpenter's credit clearly reveals his generous spirit of giving to his adopted alma mater. The following are highlights of Dr. Carpenter's career at Appalachian:

In addition to all the time he gave to his career, Dr. Carpenter also made time for community and church activities, as well as for many professional organizations. He has been a member of the following civic organizations: Master Snow Masonic Lodge (1960-61) and 32nd Degree Mason; Shriners (Oasis Temple), Charlotte, North Carolina ( participated in several Shrine Bowl games in 1960-70); Rotary Club of Boone; Boone Lions Club; American Legion; Veterans of Foreign Wars; Moose Lodge of Boone; and the Boone Chamber of Commerce.

Carpenter also has several biological publications to his credit:

After retirement, Carpenter did botany consulting and volunteer work for Project on Aging at Watauga Medical Center, where he earned his Senior Pin. 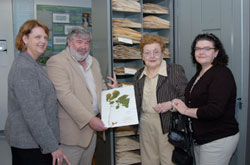 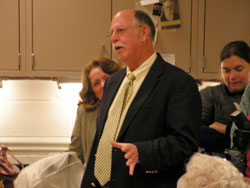 Dr. Richard Henson - Sharing memories of the late Dr. Carpenter with friends and family. (photo by Derick B. Poindexter)

"BOON" is the herbarium acronym for this herbarium, as registered with Index Herbariorum.